Should I take the Customs Broker Exam in April or October?

Should I take the Customs Broker Exam in April or October?

Should I take the Customs Broker Exam in April or October? Is there a difference in the pass rates and am I more likely to pass by taking the test in April versus October?

Students have often asked me this question as to whether taking the April or October test makes a difference to the probability of their passing the Licensed Customs Broker Exam. They would like to know whether the April tests are more difficult to pass than the October ones or vice-versa.

We plotted the pass rates for the Customs Broker Exam over the 10-year period from October 2007 to October 2017 on a graph which revealed some interesting trends. 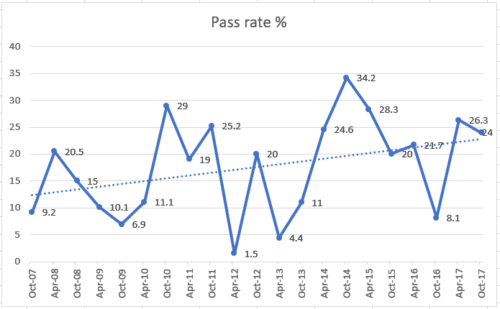 The trendline shows a moderate increase in the pass rate starting from between 10 to 15% in 2007 and rising to between 20 to 25% by October 2017. This implies that the test has become a bit easier now perhaps because a half hour was added to the time allowed to take the test since October 2014.

Taking the mean of the two pass percentage ranges in 2007 and 2017, while the probability of passing the exam was about 12.5% on average in 2007, it rose to about 22.5% by 2017 which is good news for test takers. However, a pass rate of 22.5% still means that only about one in five test takers are currently able to pass this exam.

The lowest pass rate was for the April 2012 test administration when only 1.5% of test takers were able to pass this exam. An astounding 98.5% of examinees failed this test in April 2012. However, the CBP appeared to reduce the degree of difficulty almost immediately thereafter and the pass rate was 20% in the next test held on October 2012.

The highest pass rate of 34% was achieved in October 2014, but the pass rate dropped steadily after that to reach 8% in October 2016 before increasing sharply to 26% in April 2017.

It is also seen that where the test was considered to have been a little too easy, the CBP has sought to increase the level of difficulty in subsequent tests. It appears that the intention is to have tests of a level of difficulty which will result in a pass rate of around 20 to 25%.

The time allowed to answer 80 questions in each test was only 4 hours till the April 2014 test but from the October 2014 test onwards, the time allowed was increased to 4 ½ hours making it slightly easier to pass the exam. This may explain why the pass rate shot up to an all time high of 34% for the October 2014 administration. It appears that the CBP made the test questions slightly harder in subsequent tests to increase the degree of difficulty and bring the pass rate to between 20 to 25%.

We plotted another graph to compare the pass rates between the April and October test administrations. 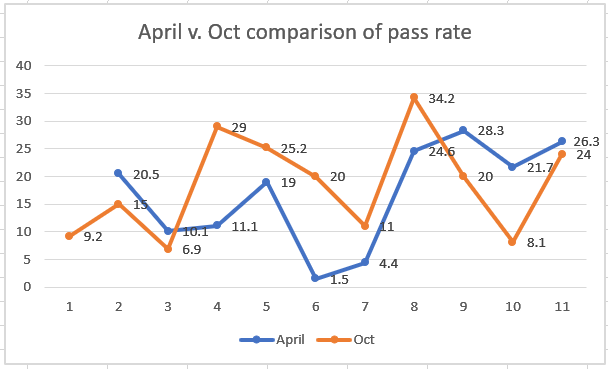 This graph shows that the trends in pass rates were very similar across both the April and October test administrations. It is also interesting to note that the movements in terms of degree of difficulty show a high degree of correlation between both sets of tests. The average pass rate was 17% in April and 18% in October which did not appear to be a significant difference. It therefore appears that there is no basis for preferring to take either the April or October test and the probability of passing the test is roughly the same for either test administration.

However, the graphs show a clear pattern that whenever the test was perceived as having been too hard in terms of very low pass rate, the next test has tended to be easier in terms of achieving a higher pass rate. Conversely, it is also seen that when the pass rate was too high, the next test tended to be harder which lowered the pass rate. So, if you failed a test and very few people passed it, you should not be discouraged because the probability of the next test being easier appears to be very high based on historical data trends.

The relatively low pass rate should also not discourage you because while the test is challenging, the material tested is not rocket science. A lot of people do not prepare well enough to take this test which appears to be a major reason for the low pass rate.

We have made your task easier by providing selected reading material from highly tested topics and 120 quizzes as well as 20 full length practice tests. If you study the prescribed material and take numerous practice tests, you will be in a much better position to pass this test than all the other people who did not have access to this guidance and practice material.

Thanks to Attorney Ruth Rodriguez of the law firm Gonzalez Rolon Valdespino Rodriguez Attorneys for sharing the data used in this analysis. If you have any questions or comments, please use the Contact Us form.